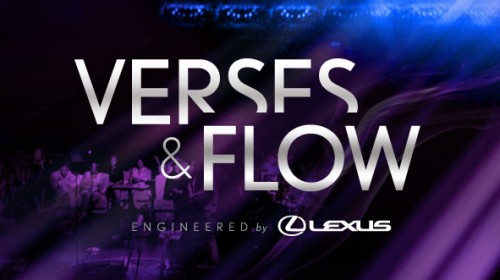 TV One did it big to kick off the fourth season of “Verses and Flow” with the openning poetry session from Icon Mann which featured seven familar faces you might have seen on the televison to do a poem on “Black Men”. Jay Ellis (BET show “The Game”), Devon Franklin (Senor Vice President of Production at Columbia Pictures & married to Meagan Good), Aldis Hodge (TNT show “Leverage”), Wesley Jonathan (TV Land show “The Soul Man”), Prentice Powell (Poet featured a few times on “Verses and Flow”), Lance Reddick (HBO show “The Wire”) and host Laz Alonso were the featured ensemble of Icon Mann.

It took me a while to get to this due to a personal situation I had going on but I definitely wanted to share it as soon as I could. I apologize for the delay. This deep poem spoke loud to me and touched me in the heart. Not only could I relate to it due to the color of my own skin but also the descriptions that each contributor spoke of  almost felt as if they were pointing to me.

I’m quiet sure this could be considered eye candy for some women, but I hope that everyone can take heed to the message.

Please share this post with others you know. Also go encourage the men you know and see in your community that are out there doing good, working hard, and being a positive influence for others. Let them know that their work doesn’t go unnoticed. It doesn’t have to be a holiday to acknowledge someone for the work that they do. You’ll never know how much of a difference it might make in that person’s day. Peace and love, do enjoy.

If you can, try to catch future episodes of TV One’s “Verses and Flow” on Saturday nights at 10p.m. EST.