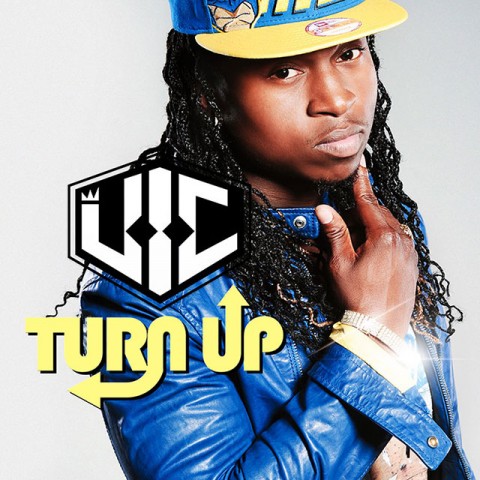 As rap music continues to make its push into the pop world (“Hip Pop”), V.I.C. has returned with another dance record to strengthen it’s stance. “Turn Up” is his latest and produced by Mr. Collipark (genius behind V.I.C. previous hit “Wobble”, the works of Soulja Boy, & Ying Yang Twins). Layered with an EBM (electronic body music) beat abd auto-tuned lyrics to match you can tell exactly where the artist and producer are going with this record. Within the first 30 seconds of the song, V.I.C. reminds you he is the creator of probably the most infamous line dance record “Wobble” and that since recording it he’s been profiting very heavily touring off of it. I can’t knock him at all for doing it, at the end of the day he has to make money.

There’s more money in pop than hip hop, hence why there’s a semi-new form of cross over music being pushed. Leader of TheSkinnyC, Kenya wrote something about it around Thanksgiving. http://www.theskinnyc.com/2013/hip-pop-the-new-in-thing/. Unlike the boss lady Kenya, my opinion of Hip Pop is different, I’m down for it. I’ve always been one to accept the thriving off flow of commerically successful music. Believe it or not I’m a fan of EBM type rap records. I strongly feel that I cound rock a party in Miami or Las Vegas. Over the last 4 years there’s been some strong Hip Pop artist that have done great songs. Black Eye Peas, Flo Rida, Pitbull, & Hans Inglish aka Flawless (http://www.theskinnyc.com/2012/bumpers-ah-yeah-flawless-feat-steph-jones/) are just a few to name.

There isn’t an officialy video yet for it but this link is directly from the V.I.C. youtube channel. It’s consists of the lyrics of the song. I’m pretty sure in the next few months they’ll be a  choreographed visual production available.