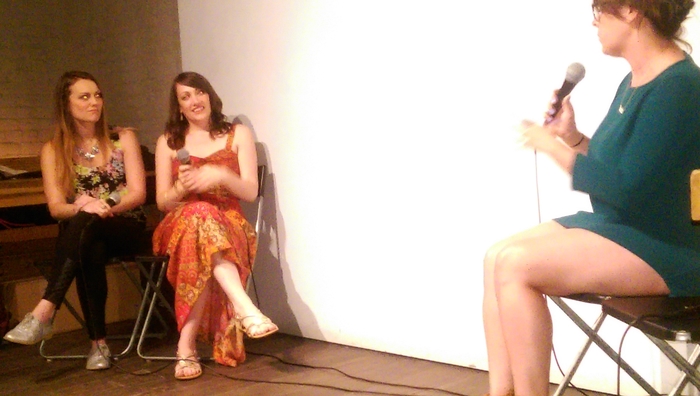 The event featured female film creators of six comedy webseries, including “Rules of Cool”; “John and Jane” ; “This is Art” ; “Sitting on Babies” ; “Dates, Mates, and Clean Slates”; and “MasterDate” – all self funded.  “I think it’s awesome that other woman can collaborate to come together and create events like this and to say the entertainment industry isn’t all men anymore,” said Militano. 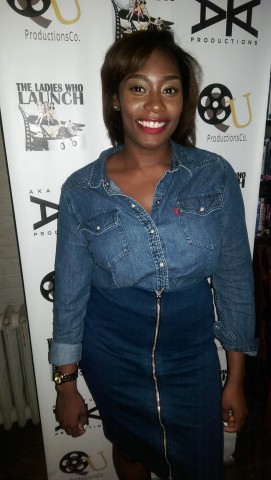 Many of the webseries’ created funding campaigns on sites like craft funding and Indigogo.com and have raised $5,000 to 15,000 to create their shows.  Caitlin Cooke and Lacey Jeka star in “Rules of Cool” Lucy and Kate, a pair of friends dependent on each other- so much so that they enter speed dating- as a party of two, speed dating with the same person at the same time.  Prior to their webseries, the pair moved in together and tried to throw a house party with the expectation of a project X night, yet only one friend arrived.  But their one friend proved to be just the perfect guest. After recommending they start a web series based on their life and the desire to be cool, Cooke and Jeke connected with Ashley Kate and others to create “Rule of Cool.”  They filmed wherever they could, including in their apartment in Spanish Harlem, a Brooklyn bar, Central Park and West Village.  In three days they filmed nine episodes.  “We were spending nights-we were up nights- it was like a big slumber party and everybody was crapped out at the end of it, but we got a lot of good sh*t,” said Jeka.

Militano and co-creator Ryan White shared a similar story. As friends and roommates who reminisced on life and watched YouTube videos daily, they decided to turn their comedic life into a webseries.  Aside from their writing talents, Militano and White reached out to loved ones for funding help to create “John and Jane.”  “I was very nervous about that concept because I was thinking, I’m really essentially asking my friends and family for money,” said Militano. “So I made our budget very very low and thought, ‘let’s see if we even get that.’”  And they did.  The team filmed five episodes in five days.  The “John and Jane” crew continues to grow as they work in the development of season two and grow with their characters.  “Jane is the nostalgic side of me,” said Militano. “She’s the side of me that loves Disney and grew up on it and loves 90s references, and she’s the part that kind of doesn’t want to necessarily move forward or away from that. And I Think a lot of people relate to that.”

Kate Olivia, founder of Covert Bacon Productions, joined the panel to discuss one of her many webseries MasterDate.  “I moved to Brooklyn, I tried online dating, and that is the very short story of it,” said Olivia.  With a best friend as a writer, the reality of online dating hit the web.  Two years ago the production company began. Six shows later, the team wraps up MasterDate’s first season. 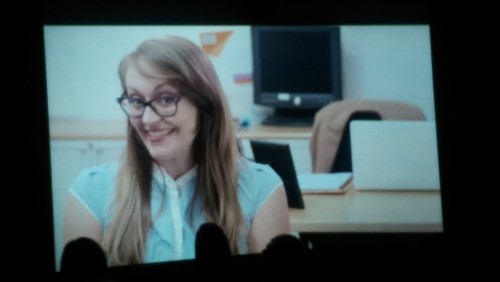 Creating a comedic spin to their real life jobs as babysitters, Brooke Jacob and Becky Whittemore, co-created “Sitting on Babies.”  The babysitters went out on a limb to form a team and explore the wonders of children and babysitters.  “We’ve made 10 million mistakes. When we look back at when we started, we knew nothing,” said Jacob.  Three years later, the show has embarked on their third season.  The show premiered the first episode of season three at Videology.

Emily Floyd and Anne Richmond graduated from art school in 2008 with high hopes of landing actresses roles in the theater world, but encountered several “no’s” along the way. After being rejected and told there wasn’t a place for them, the girls decided to create a space for their own.  “This Is Art” was created in 2011, but due to post production issues, the show aired for the first time in January 2015.  Floyd and Richmond anticipate another season.

Adams and the Ladies Who Launch team hope to continue building their audience and sharing their content with their close knit community.  “I hope that it inspires other women to work together,” said Adams.  “If we could be at Videology every month, that’s the dream.”