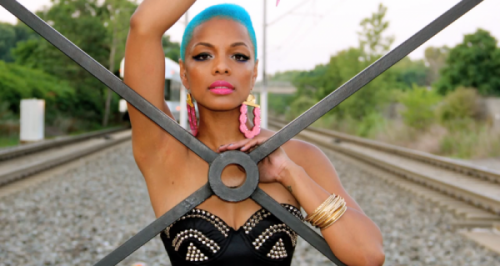 There has been a huge buzz around rising star Sharaya J, she’s been all around promoting her new single BANJI.  BANJI  is an acronym that stands for “Be Authentic Never Jeopardize Individuality”; Sharaya uses this term to encourage people to be themselves. Her fresh style mixed with a very successful background in dance is going to shoot this rising star and up-coming female rapper beyond the moon. I was lucky enough to score a phone interview with this busy lady. The interview went something like this…

JORDYN: Being that you’re from Hawaii and our president is from Hawaii do you feel that you share any of the same struggles that he had with people in mainland America identifying with people culturally?

SHARAYA : It was a smooth transition from Hawaii to Jersey City. I was born in Jersey City, but I grew up and spent many years in Hawaii.  My mother is from Hawaii; the only major adjustment for me between living in Hawaii and Jersey City were the shoes.

JORDYN: How were you discovered as a dancer?

SHARAYA: I always did shows but when I realized how serious I was about becoming a dancer, I ventured into NYC.  I never took a dance class. I got with a dance crew and started attending some dance events in the city.  I heard about a major dance agency holding auditions for their, at the time, brand new office in New York City so I auditioned and they signed me.  Laurie Ann Gibson helped define my skill.

JORDYN: Sharaya, you were successful as a dancer, what led you to creating music?

SHARAYA : I have always been exposed to music.  My father was a part of a hip hop group in the 90s, Double XX Posse, and my mother was a music “connoisseur”, so I always enjoyed writing even as a little kid.  When I became a dancer, I bumped into Missy Elliot through mutual dance friends.  Missy asked me if I was an artist and I responded “I’m trying break into the industry” and missy offered me guidance.

JORDYN: We tragically lost Aaliyah sometime ago and with the loss, Missy fell back from music and hadn’t co-signed any other female artist.  What do you think made her decide that you were the one she’d come back into music for?

SHARAYA : Missy co-signing me was something that was meant to be; I didn’t seek out Missy.  My big break happened through a casual conversation amongst friends; Missy Elliot knows talent and saw something in me.  She doesn’t create artists, she takes somebody that has something and refines it and brings it to the forefront a 100%; she noticed something in me and that just inspired her to work on this project.

JORDYN: Since your father was a member of the hip hop group Double XX Posse, does this heavily influence your music?

JORDYN: There are a lot of upcoming female artist; in a world of twitter beefing and silicone butt injections how do you intend to outdo artist like Nicki Minaj and Azealia Banks?

SHARAYA: I’m just trying to create my own name.  I’m not trying to compete with anybody. There is enough space for everybody to win.  My goal is to stay focused on what I have to do.

JORDYN: What inspired you to create the Banji Movement?

SHARAYA : Missy and I put together  a meeting with some record execs.  I put together a performance with some of my dancers; I mean BANJI babez. The next day they called and said they loved the records and thought I had amazing stage presence; but all they need for me to do was : get a long weave, put some pumps on,  wear less clothes and sell sex more.  I wanted to create my own image and what they wanted me to do was be the stereotypical babe. That moment inspired me to push the idea of embracing individuality.  From there I created the acronym BANJI (Be Authenticate Never Jeopardize iIdividuality) it ultimately turned into a movement.

JORDYN: Where do you plan on taking the BANJI Movement in the future?

SHARAYA: The idea is to present this movement to the world.  Many people have embraced this movement already. Hopefully I can use this as an umbrella for many more things like working with kids.

JORDYN: I absolutely love your look! How would you describe your style, without using BANJI? Where do you draw your fashion inspiration?

SHARAYA: Real, authentic, true to my roots, “I wear what feels good to me “

JORDYN: Where do you shop?

SHARAYA:  I mix high-end clothing with different pieces. It doesn’t matter where it’s from as long as its cute.

JORDYN: If you were to make a clothing line, which popular designer would the line be similar to?

SHARAYA: Patricia Fields because its funky and you can find really cool one of a kind pieces

For more on Sharaya J make sure to follow her on twitter @Sharaya_J and support the BANJI movement!